The Search continues, and were about of Shepard found

The evening began with the group bumping into a group of Repaer constructs which included 2 marauders, 2 Cannibals, 5 Husks. This caused a fight which the group defeated, After the fight ended the group checked to see what they could loot from the corpses and found nothing salvageable, At the same time Zev noticed a strange protrusion on one of the Marauders neck and was able to surgically remove it only to find a strange chip in its neck, at first the group thought it might have been leftover Reaper technology for them to keep control but after careful checking they realized It was not Reaper tech but they believe Batarian technology, purpose unknown. After removing the chips the group moved off a ways and decided to wait the next two hours to see what happened, about the hour or so mark they noticed a ship leave the fortress and head this way, the Batarian shuttle hovered for about 20 minutes before head back to the fortress.

After this instance the group decided to move towards the fortress their ultimate goal. Once they arrived they spent the next few days examining the place to find a way in, during their examining of the place, they noticed that the place has a standard cap of two assault shuttles, that do their rout then land for thirty minutes, which puzzled the group until Shuul noticed in the distance two Harvesters also flying a much wider cap dart fast into the area during those 30 minutes. 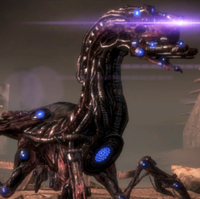 At the same time they where listening to the chatter over the radio and noticed fairly standard chatter. Much of it in a code they couldn’t decipher. They also noticed an out door landing pad where shuttles where landing and taking off, which large crates being put on but nothing coming off them. After this they continued to look until they found what was described as a Sally Port into the place, that had been overgrown and un-guarded and un-used.

The group eventually decided to use this door as it seemed to be the easiest and stealthiest way in. They send Shull forwards in stealth to check it out and he found it completely unguarded, which did put them in a guarded position but he was quickly able to open the door and peer inside, inside he saw a dimly lit hallway that was extremely dusty, it was at this point he waved the rest of the group through. The group moved through this area finding it unused before opening a door that was brightly lit but was used for storage. So the group moved and found an elevator, which they manually opened the doors for to find an empty shaft as the climbed the ladder a few floors up, and found another empty hallway that was active and found an access port to get some information. This information included a map of the place, which they found goes a ways down a couple of hundred floors, most of them taken up by housing. and a number of floors just labeled cells. They then found a number of floors above them is the local Security office for this sector, which is where the group went.

As soon as they opened the door and walked out they where greeted by a fight, a bunch of Krogan, Vorcha and a bunch of Varren, The Fight itself was not easy as there was no cover, Shull was taken down, but quickly revived. The group eventually won the fight, They where easily able to get into the security office and close down the sector they where in. which gave them time to look at the security files. they found quite a bit. They had control of the cameras which showed them rows upon rolls of cells some of which have occupants and in these cells you see what look like docile Repaer constructs, bruits, Marauders, Cannibals and others. If they keep watching they would see a group of Batarians and Krogran and Vorcha taking a group of Brutes and a Marauder out of the cages and moved them to awaiting crates and taken to an awaiting transport. They also found a memo to get the sole human occupant of the cells with the name Shepard, dated a week ago requesting by the General to get her ready for transport to a space station, in orbit around Erzbat. They also learned that the Batarians are both harvesting and creating them, but not at this location. they couldnt find that location in the system they had access to.

The group also thought about blowing it up themselves but quickly disabused themselves of that notion when they realized it wouldn’t be easy. So the group took advantage and got off the planet and back to the Normandy where they let SPECTRE Williams know to contract the Alliance or the Citadel about what’s going on and hopefully get them to send a fleet to destroy the place.

Attack on Warlords base