Session 3: Attack on the Asimov pt 2

The fight continued from the session before, the group was out numbered but was quickly able to defeat the fighters, but not without John going down once but was healed and was able to get back into the fight and help the group defeat their foes.

As soon as they defeated the enemies and healed up, they decided to head to the bridge, and immediately realized that this ship had been severely attacked by an unknown foe. They found most of the crew floating dead in the ship, and areas of the ship that where completely open up to space. After backtracking a bit they where able to find the bridge and its door sealed shut but without power. Zev initially tried to power the door through his Omni tool, but failed. This forced the group to go with plan B and jury rig 5 grenades to create an explosion that would blow the door but not destroy themselves or the cockpit. This was a success.

Once the cockpit was opened they saw one of the screens light up with a message from Captain Stonard telling them that they failed to get her and good luck and then a countdown that the group figured was the ships self-destruct. This got the group minus scrambling to try to get to engineering before it blows, not everyone making it for various reasons, the three that made it where Zev, Gregor and Shuul. Once there they made a mad dash to try to turn the self destruct off, but found due to the damage they where only able to extend the timer to a half hour, which allowed the group to be able to separate to try to get anything valuable they could.

Shuul was able to get two videos
One was a video of the captain and the black armored figures walking off the ship and onto the ominous black ship before the ship fired on the Asimov with most of her crew onboard.

The other video was that of the Asimov picking Jane Shepard up, and delivering her to an unknown Bataran ship out on the rim in the Rosetta Nebula, specially Alpha Draconas.

Gregor/Zorii was able to scrounge up some credits and equipment, as well as being able to retrieve some of thee armor.

John got a few other items he shard with the group and three unknown pads.

The evening ended with the group leaving the ship and heading back to the Normandy before the Asimov blew up.

The group got enough xp to go to level 3

Session 2: Attack on the Asamov

The group Left Omega and took the gate to the Armstrong Nebula before heading to the Hong system, The Normandy was not able to dock at the station so the team had to take the shuttle. The Kodiak shuttle docked at the station and find that the station is not responding. They found that they have a secure seal with the station but no answer from it nor did the door open. So Shuul was able to unlock and open the door, the group found that there is air is not operating perfectly,

The group started to walk into the central area noticing that their where sleeping pallets, on the floor and signs of a combat and they notice that all computer terminals seemed to be specifically targeted. It dauned on Shuul that they might be able to cobble together a working machine for a time, by canabilizing the other units to get one working for a time. Shuul is able to hgack into the system, and found one of the ships is the Nostromo, T;sumka. The found the fight happened about a day or two after the Asimov arrived. The last update about 4 days ago.

The group decided to check out the Nostromo, They found more scochmarks leading to the Nostromo and the doors blasted open, to find that the ship is pitch black without any lights or any power. They made their way to the bridge to only find the captain, dead slumped in a chair.

John, Zev, and Gregor head down to engineering, they opening the door in engineering as a potshot wrang out hitting John as he asked why you attacked, the Gregor tried to get him to come out of hiding as the guy was obviously scared. They were able to get him to come out of his hiding space and Zev was able to do a quick perusal of him, that he is in a bad mental state either mental or farmacuitical, he also had a broken arm, as the group was talking with him trying to get information out of the kid without any luck, John was able to retrain him but not get the gun out of his hand which went off while they tried, but where eventually able to get it, and Gregor was able to give him a protein bar. Zev was able to gfet the power back on, at that point a bunch of drones and Mechs activated and attacked the group, they were eventually dealt with quickly. The ‘kid had firmly ensconced himself in a corner hiding even more scared then he was. Gregor tried and failed to get the kid to tell him his name, then Zorii tried. The kid told Zorii the name Michael, He gave the group information on who attacked that he saw white armor.

The group went to the bridge to watch the video as they saw the Asimov dock with the station, then they saw a sleek black ship disgorge half a dozen members in white armor walk onto the station with an unknown female figure in some sort of uniform, at the same time you see Stonard walk off her ship with two figures in black armor following her, as they enter an a separate room without cameras, as they are speaking you see half a dozen Cerberus armored figures start to kill everyone, before they leave, then the members of the Asamov do the same thing.

Shuup was able to find an idea of where they went or will go to the Nubian Expanse, Hades Nexus, Pylos Nebula, Sigurd’s Cradle Psi Tophet.

After returning to the Normandy, and let Ashley know what they found who brought EDI into it and they decided that Pragia in the Nubian Expanse would be the most probable place to catch Stonard and the Asimov.

Once they arrived at Pragia they found the Asimov floating in space leaking atmosphere and and not under power, they used the sensors to check to see if there was any life and found their was life and minor power, when they arrived on station they got themselves embroiled in a combat .

The group met at the docking bay they where told you at D23 a bit earlier then the 0500 hours they where told you meet, as the group stood there waiting, they did notice that the place was completely empty, even at that early in the morning their should have been some sort of activity but their was none. Before anyone could do anything about it the ship they where waiting for the The SSV Normandy 2 arrived and docked.

but in Alliance colors

They watched on the monitor as two figures exited the ship both they had met one SPECTRE Major Ashley Williams, and one Specialist Samantha Traynor enter the bay, and introduce herself and made sure the members of the group where who they where supposed to be.

The group quickly embarked the Normandy and was escorted to their quarters before meeting back up at the conference room to speak about the reason they are there, the group spoke to each other while waiting and introduced themselves, until the SPECTRE and EDI walked in and the conversation began in earnest.

Traynor got a video showing Shepards body breath and this mission is to hopefully find her and bring her home.

The conversation quickly went to information, which isnt much.. the only thing they know is that they got the video who sent it to them is unknown but they did learn of a ship and her pilot who they believe transported Shepard’s body. where is unknown, this captain was named Vallorie Stonard, a captain AWOL from the Alliance, who captains the Asimov, and that the last place the Asimov was known to be was Omega.

The Normandy arrived at Omega

fairly quickly, the ship docked at Omega, and the group disembarked and went right to a terminal so Zorii could see if she could contact an old friend from her Eclipse days, she was able to contact one and set up a meeting for an hour in Afterlife 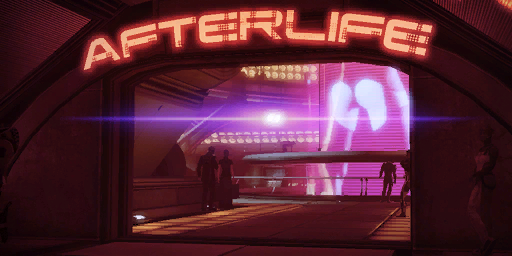 An hour went by and Zorii and John went to see her contact and old friend, and they made a deal for a favor from a SPECTRE, and she told Zorii that the captain was heading to a station on the Armstrong Nebula and a station in the Hong system, Gregor and Zev had a nice walk and talk with Maalin at the Clinic before deciding to head back to the ship, when both groups arrived, while Shuul was hacking the system not getting much other then that the Asimov did dock here and picked up a cargo but nothing beyond that. what Shuul did not realize is that the system noticed him rooting around in the system and sent people to investigate, initiating a combat; Lead by a Krogan of the Bloodpack, 3 Eclipse troopers and 3 loki Meks.

The fight was fairly short, with Zorii calling the Eclipse troopers off, while the rest of the group took care of the Meks and the Krogran with Shuul the only one of the group to take damage…

the Night ended with the grop getting 170xp each